Flooding of Yuyao, How the Chinese Government Created Enemies In a Natural Disaster

Yuyao is a county-level city in Ningbo Prefecture, Zhejiang Province. Due to Typhoon Fitwo, much (over 70% of downtown) of Yuyao had been underwater.

Natural disaster like this is often seen as God-sent for western politicians, as this set a great stage with free and unlimited camera time for them to demonstrate how much they care about their constituents in need. Mayor Giuliani, Governor Christie and President Obama all had their political lives saved or elevated from major disasters. However, in Chinese politics, where it is mysteriously held that even a natural disaster could be the fault of top officials, the No. 1 priority of any level of government officials was to bury any negative news as much as they could.

Three days after the beginning of the flood, and while over 50% of its downtown still submerged in water, the local government broke the silence and denounced that water had receded, and that nobody had died despite floating bodies nearby.

Angry residents asked the official reporters of Ningbo TV to turn their camera away from the only dry place in town, and tell the outside world the need for disaster relief assistances. The journalists were offended, and cursed the residents of being mentally sick in failing to recognize that they were on official propaganda mission. A brawl ensued. 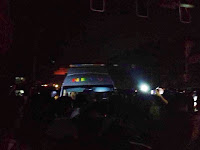 For the first time since the flood began, many local resident saw police SWAT team on the street. Not to help with the flood, but to beat people with batons. More people rushed to argue with the police, and even larger group of people joined the battle.

A recent crackdown of online rumor spreading might have caused the initial delay in rescue and relief efforts. The government recently announced through a joint memorandum of judicial interpretation by the Supreme Court and the Supreme Procuratorate that any misinformation would be prosecuted with criminal code. The legal recognition of 'misinformation' had been exemplified by a series of cases in the past few weeks. For example, when 5 cars were involved in an accident, if someone posted online that 4 cars were involved, then it would have broken the law. A Henan women was arrested because she posted these language (a literal translation: "I heard there was a crime took place in the neighboring village last night, was it true?") A middle school student in Gansu Province was arrested when he questioned why didn't local police act to track down the criminal of a homicide case. In a sharp contrast to the busy online mobilization and coordination of rescue and relief after previous disasters, such as the Sichuan earthquake and the bulletin train accident, almost nobody talked about the unprecedented flooding in Chinese online media for days.

A hundred and four years ago on October 4, 1909, a famous minister Zhang Zhidong passed away. Zhang was deemed that last capable minister in the Qing Dynasty (1644-1911). In his last days Zhang had a conversation with the Prince Regent Zaifeng. Knowing it would be his last opportunity to pass his concerns to the rulers, Zhang tried to point the Prince people's resentment to the Court. Zhang cautioned Zaifeng that he should listen to what people were complaining. The Prince stopped him, and assured him that nothing should be worried about because 'we had soldiers'. Later Zhang recounted the exchange in utter disgust, and labeled the 'we have soldiers' phrase as a sign predicting collapse of government. Zhang died in three months, and one year later, Qing collapsed in a sudden when a few soldiers in Wuchang rebelled.

Where do you live?

What is your native language?